Privacy & Cookies: This site uses cookies. By continuing to use this website, you agree to their use.
To find out more, including how to control cookies, see here: Cookie Policy
London is currently a proud sea of red, white and blue thanks to the bunting, flags and face painted children celebrating the Diamond Jubilee. The atmosphere is electric and London is merrily embracing all of its British treasures. And what better treasure then the Queens crown itself?
Luxury department store Harrods has filled its windows with 31 dazzling crowns – all individually designed and created by the finest in fashion, cuisine, jewellery and beauty.
Yesterday I took a visit to the world famous store to marvel through the glass at these unique creations. They are definitely fit for a Queen, and any fashionista for that matter!
Its always very exciting when different designers and specialists get the same brief. I couldn’t wait to compare the crowns and see if I could guess each designer before looking at the name. I think the crowns represent more then just a tribute to the Queen, they also show a brand heritage that is just as raw and iconic. There were some classic interpretations, along with the more adventurous, a few surprises and some real gems (there were a fair few diamonds too!) 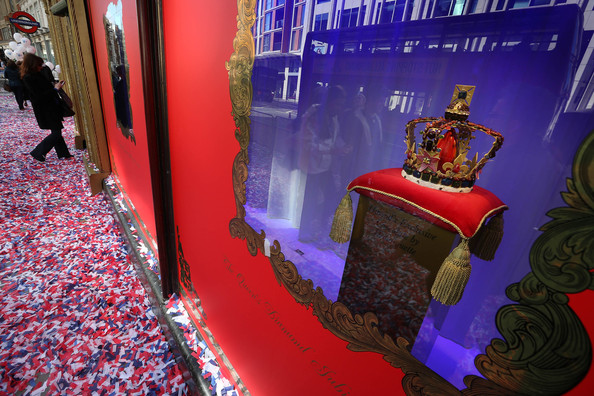 I’m already feeling very inspired to design my own crown, one which would represent my personal taste alongside my love for England. But I have a feeling that my wavy-cut scissors, PVA glue and Christmas coloured glitter may not be adequate to make the finished item.
Try scrolling down and guessing the crowns for yourself, I’ll leave the designers name underneath the image. It’s fascinating! 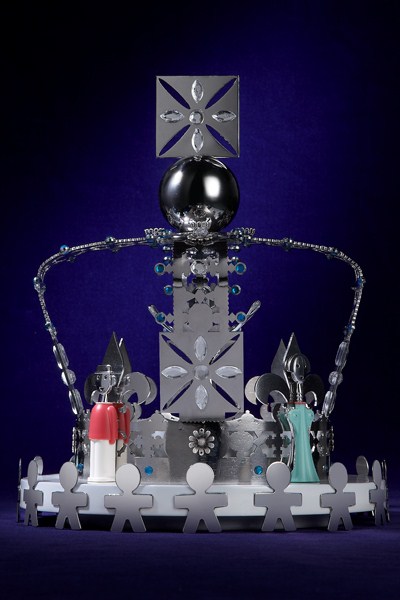 Alessi
The “Carosello” crown was designed by Giovanni Alessi who wanted to capture the pride and spirit of the British nation. The italian company that is famous for its luxury joyful kitchen utensils used stainless steel to create the crown. 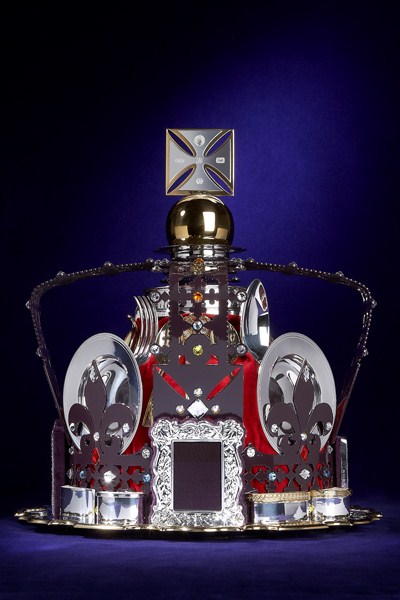 Carrs
Carrs uses its famous silverware cutlery in this fit for a picnic crown. 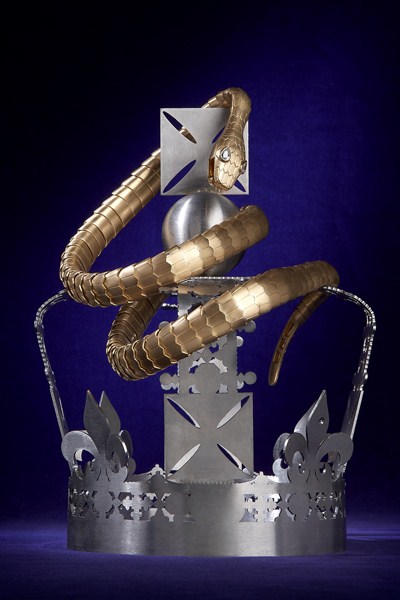 Bvlgari
The crowns statement gold and silver colouring reflects both Bvlgaris prestigious jewellery and a ceremonial old England. The snake is an interesting yet menacing choice, made even more remarkable by the fact another designer also chose this creature. 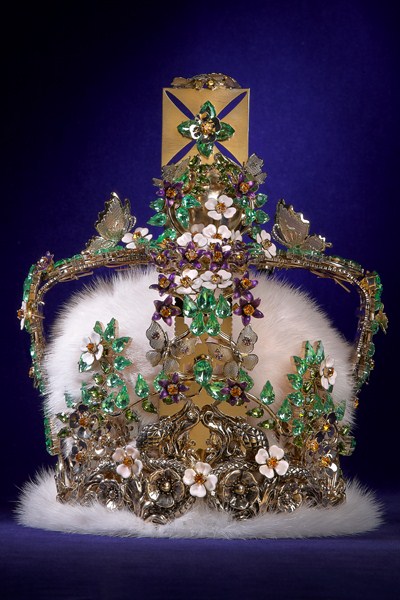 Roberto Cavalli
This poetic crown is covered in intricate butterflies and flowers made of gemstones. It resembles the beautiful historical gardens in England. 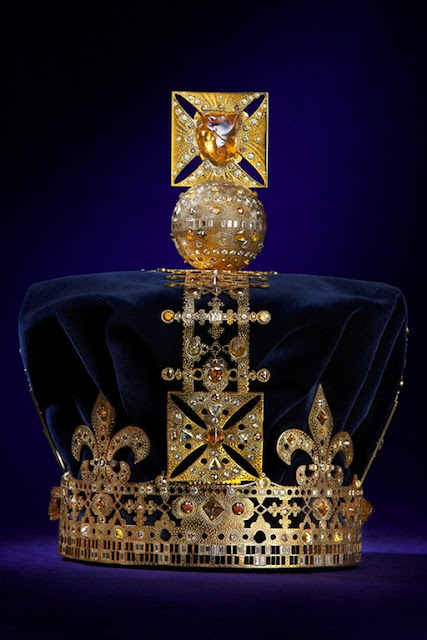 Da Beers
Being world famous for their diamonds, I can imagine the designers at Da Beers were ecstatic to be asked to create their own version of the imperial state crown. And of course, diamonds were very much on the agenda. The crown includes 974 diamonds of which 797 are polished at the rest are rough. 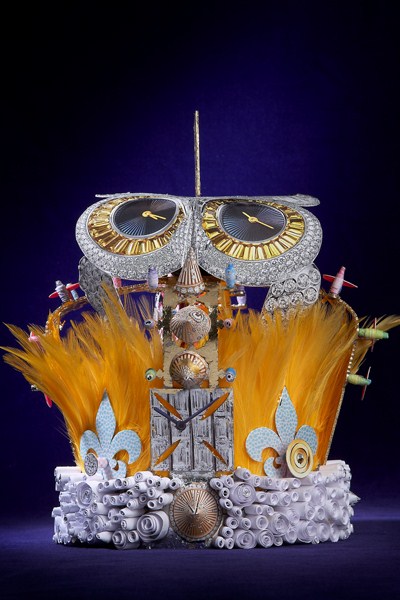 Chopard
The luxury watches and jewellery manufacture created this crown based on their Animal World Haute Jewellery collection. The pretty iconic charms and diamond watch are put together to create a spectacular owl, called “Bruce” 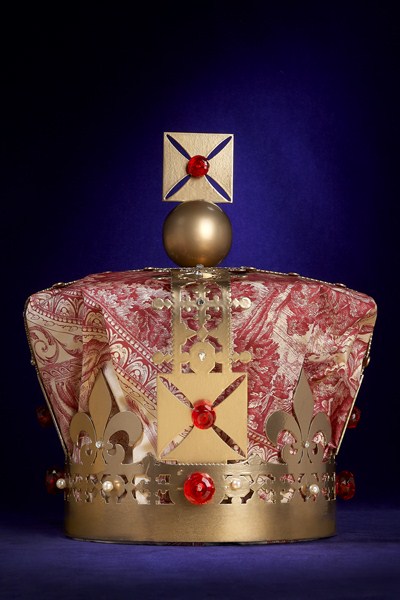 Clive Christian
When it comes to luxury Clive Christian is usually the one wearing the crown. The interior designer even has his own perfume which is the most expensive in the world! Here he’s gone for his trademark ornate decor with a decorative design in red, white and gold. 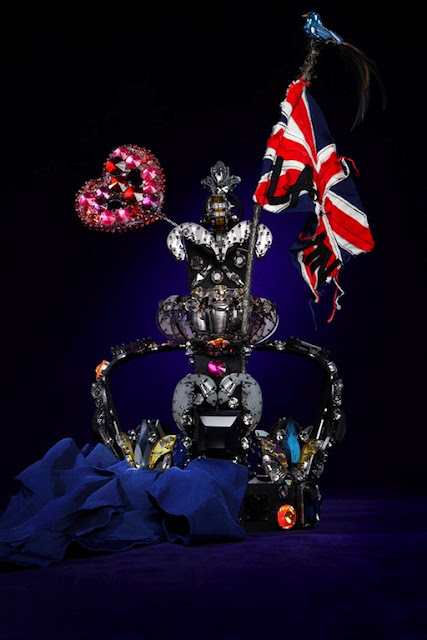 Lanvin
This vibrant and modern take on the Imperial State Crown is made fun and joyful by the gem encrusted pink heart at the top opposite a rock ‘n’ roll burnt Union Jack flag. 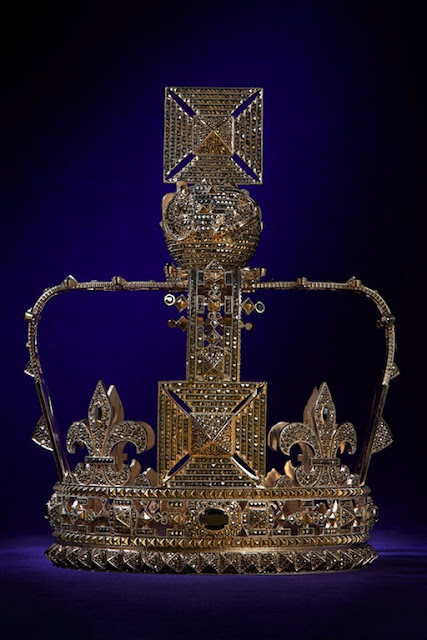 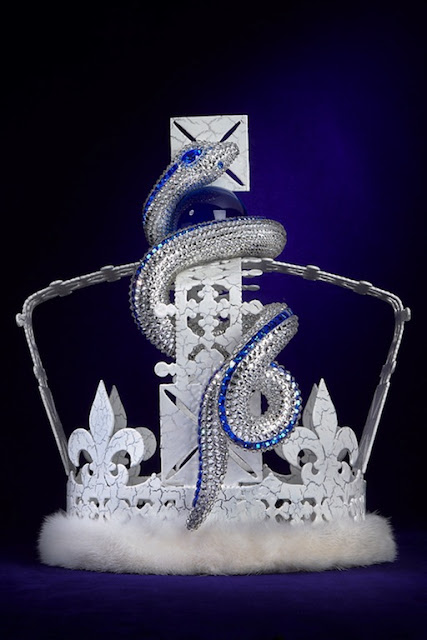 Boucheron
The french jewellery house is known for its diamond encrusted animal creations and said the snake symbolises protection and infinity. 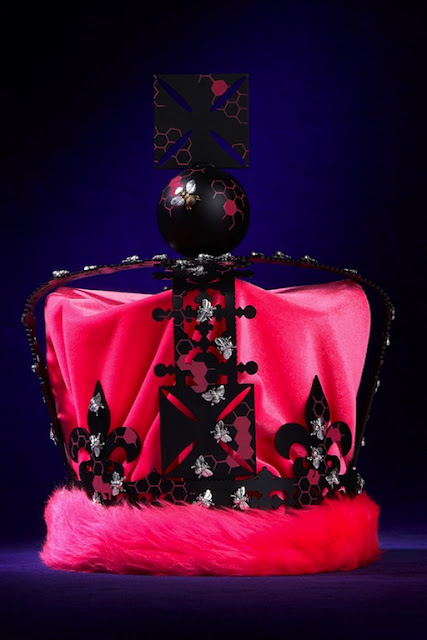 Theo Fennell
With his signature pink and black this crown is a bold, modern alternative to the others. The little bees and honey comb design was chosen to reflect “the Queen bee.” The designer “hopes it has a sense of jolly timelessness,” 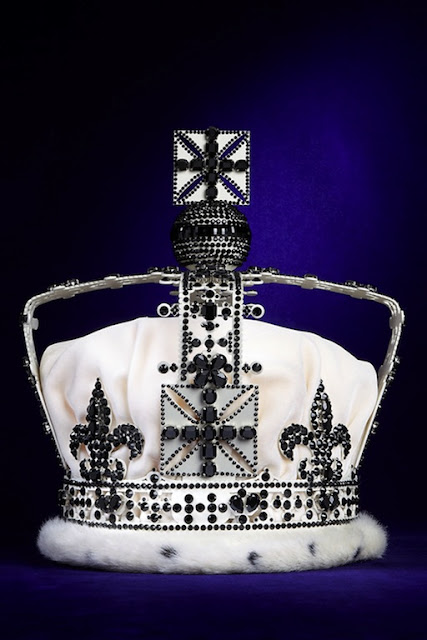 Jo Malone
Being a fan of monochrome this crown is one of my personal favourites. Its chic, understated and undeniably classic. The iconic signature cream and black colours demonstrates the elegance of Jo Malone. 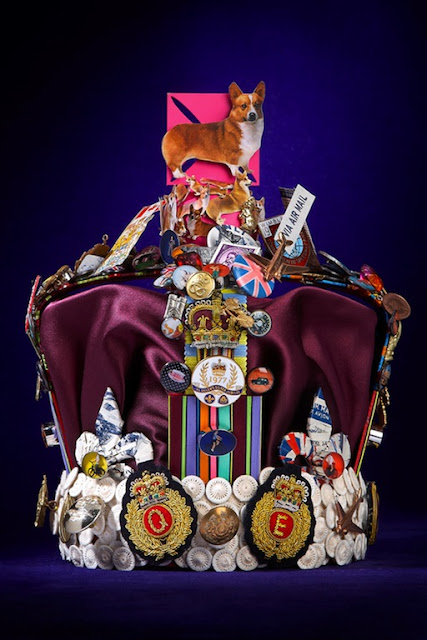 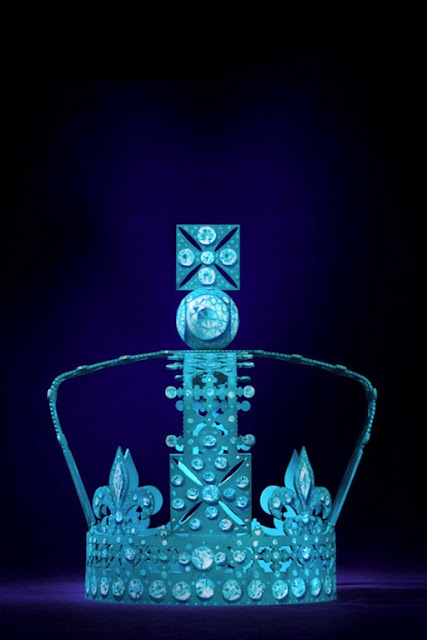 Tiffany & Co
Tiffany went for their iconic blue and embellished it with crystals. 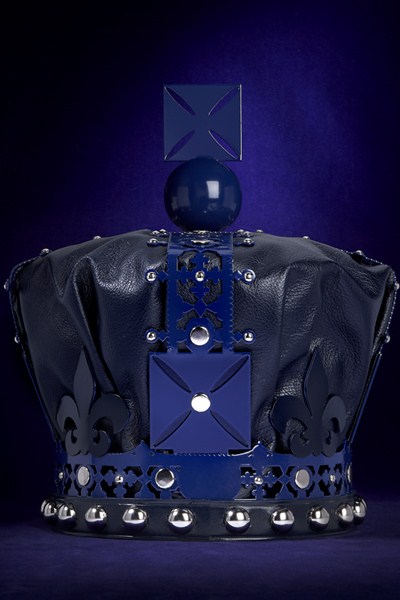 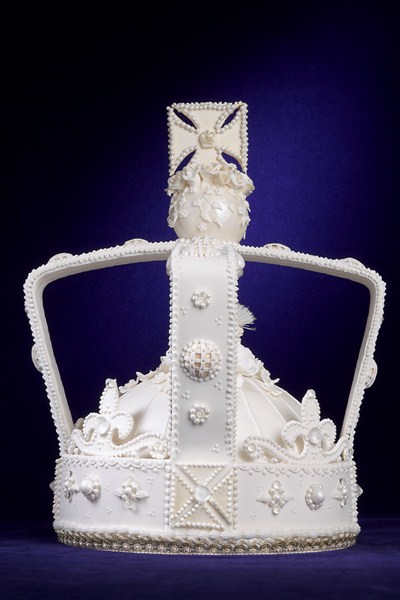 Fiona Cairns
Cairns designed the royal wedding cake for Prince William and Kate Middleton in 2011 so it was most fitting that she was asked to create a crown in honour of the Queen. This delectable creation is made up of fruit cake and decorated with sugar. 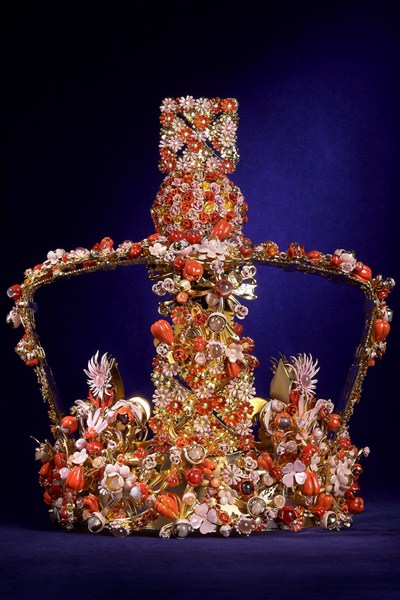 Salvatore Ferragimo
Italian shoe designer Salvatore Ferragimo created this mesmerising piece. The tiny roses and pearls against gold and coral look exquisite and this is certainly one of the most imaginatively detailed crowns. 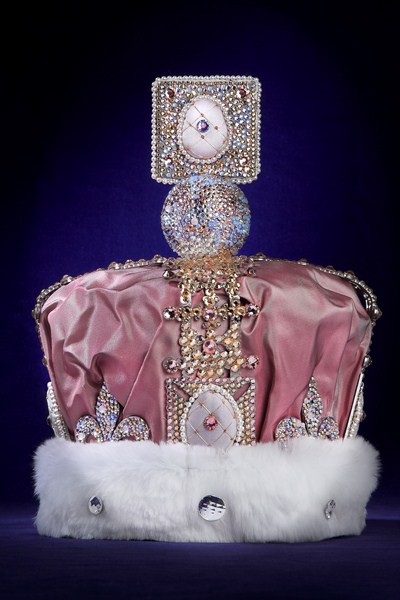 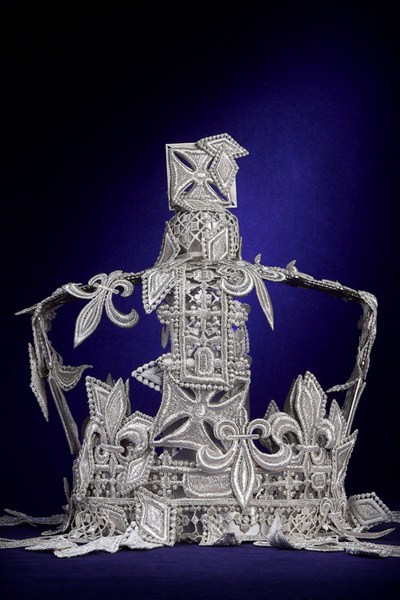 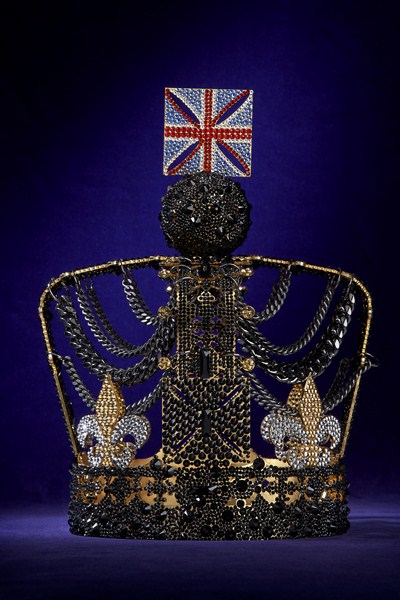 Erno Laszlo
Erno said “”My inspirations for the Crown are the British People. They have irony and elegance and they know it” Personally I think this is bling meets rock ‘n’ roll, with the black chains and heavy use of crystals 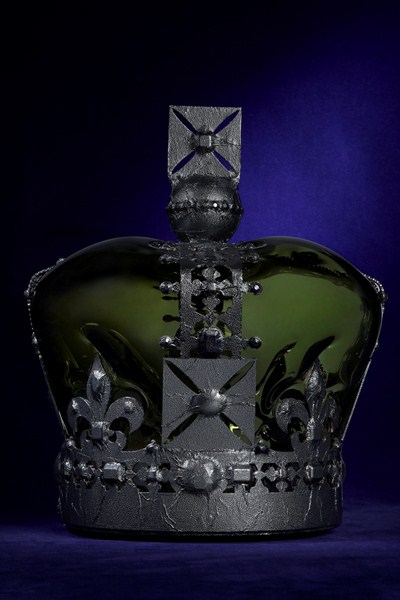 Dom Perignon
This was my favourite crown. Although I have to admit I’m slightly biased because Dom Perignon is my must-be-in-my-hand accessory when I’m in London. I owe many wonderful nights to this company! The hand blown glass was made from, of course, one of their bottles and the finished foil is iconic of Dom Perignon. 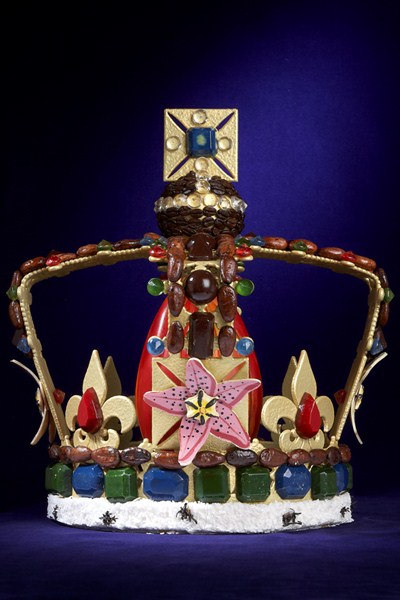 Dermaquette
The british fine chocolatier created this toothsome crown inspired by the common wealth. Using a delicious combination of white chocolate and edible gold. The cocoa beans and coffee represent the chocolate that is made in other common wealth countries. 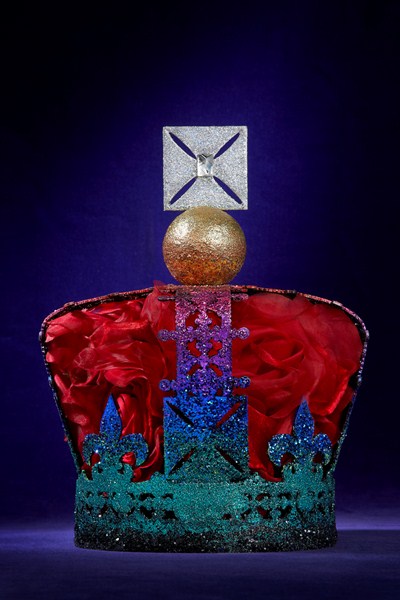 Solange Azagury-Partridge
Personally I found this crown mesmerising. The striking colour and glittery detail cannot be seen fully in this photo, in person its even more spectacular. Jewellery designer Solange said the crown was designed to reflect the “multi coloured diversity of the people of the commonwealth,” she also said “The joy colour brings is like the joy the Queen gives.” 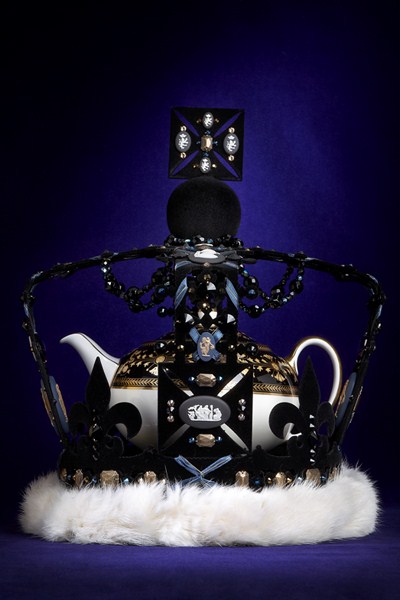 Wedgwood
The best of English pottery mixed with one of the most iconic English items; a teapot. 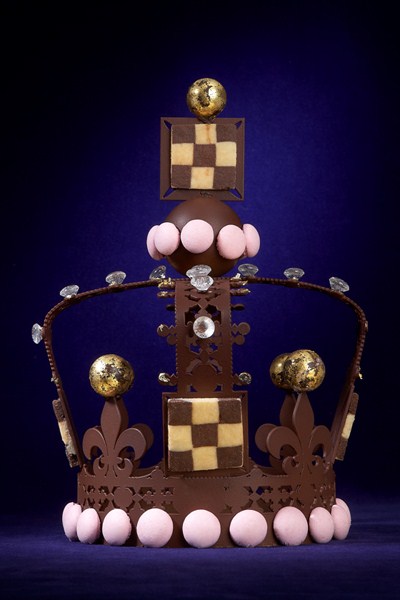 William Curley
The award winning british patissier and chocolatier has covered his delightful edible masterpiece with little macaroons, biscuits, bon bons and delectable chocolate truffles. This is definitely one of my favourite crowns; pure indulgence! 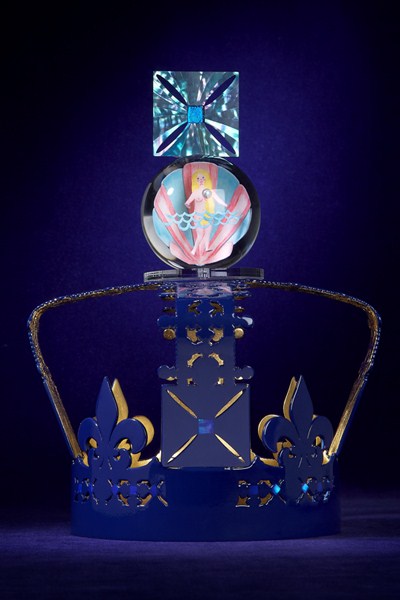 Mikimoto
Mikimoto is known for its pearls, so designing the crown based on the ocean seems like a perfect tribute. 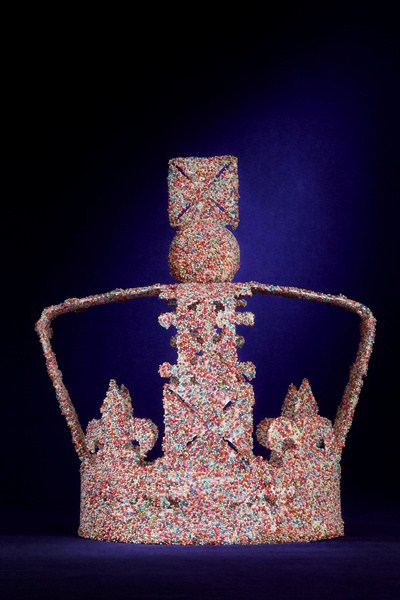 Mulberry
Designed to look like an English cake this delightful crown is covered in hundreds and thousands. This certainly adds a child like spirit to the display of crowns, and reminds me of all the jubilee cupcakes make my children across the country. 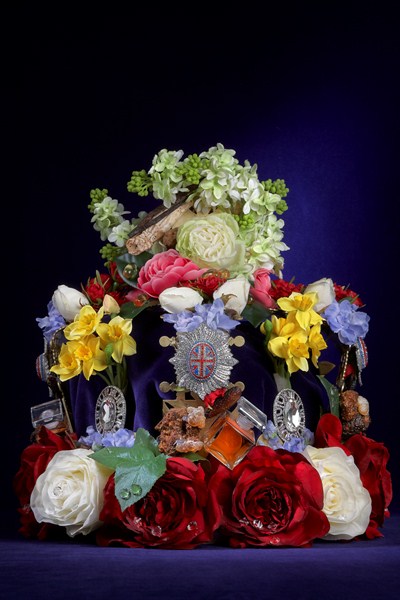 “My crown symbolises the most sacred part of the Coronation Ceremony – the moment Her Majesty The Queen was anointed with Holy Anointing Oil,” explains the British perfumer. 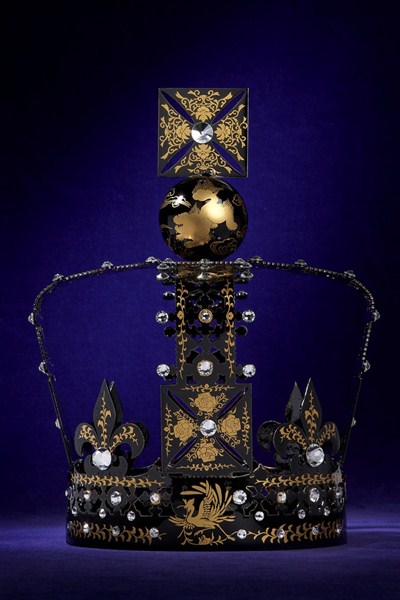